It’s the 28th anniversary of World AIDS Day. It’s an important day for the community- a day of remembrance for everyone we lost to the disease and a day when we should reach out to those affected and let them know we’re here for them and that we won’t stigmatize or pass judgement. This year’s campaign’s on point- has our knowledge and attitudes towards HIV changed with the times? Or is HIV Stigma on the increase? If you’ve used a gay dating app recently it’s pretty clear that stigma still exists and it’s right here in our own community. 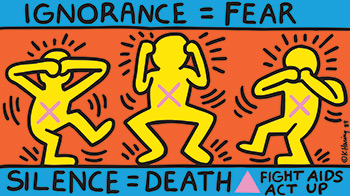 There’s no excuse for stigma towards something that scared us as a community in one way or the other. We should show compassion and foster an inclusive community were we genuinely welcome everyone regardless of HIV status. We should also be up to date on the current state of things and know that it’s isn’t what it was before. I was disappointed to see that not very many of my friends took a second to reflect today or share something in remembrance or simply to show support.

There’s something to be said if the challenge of living with HIV isn’t actually living with the disease but living with the stigma that comes with a positive status. And it’s another thing if we’ve become so nonchalant not to challenge the status-quo and simply roll over when witness stigma first-hand. I’m not saying to pick a fight with every dick on Grindr or whatever, but if you’re comfortable with hooking up with someone who has ‘DDF for same or clean u b 2’ then you’re just as much to blame. Ignorance is no excuse.

Point is, anyone can contract HIV and with new methods of protection like PrEP, there’s no reason to act like someone with HIV is less worthy of love, affection or physical satisfaction. Put the shoe on the other foot- how’d you feel if you were made to feel ‘dirty’ and unwanted due to your status? Do some research. Figure out what it means to be HIV positive in 2016. Read up on undetectable viral loads or better yet, volunteer or visit your local HIV/ADIS chapter and see how people live with HIV today. Don’t let the hard work of those that stood up and fought this epidemic be in vain. If someone discloses their status to you be respectful and understand that your words and actions have consequences. Stop excluding, judging and rejecting.. It’s never too late to change.