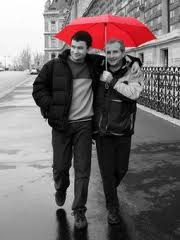 Gay relationships.. So many different views and opinions exist about whether or not queers can have successful relationships.. Or what a successful relationship even looks like. Is it one based on monogamy– having one spouse/sexual partner? Or is it one based on polyamory– having more than one spouse/sexual partner? I think it all depends on the guys involved and what they’re looking for.  But I often wonder if  one ‘s better than the other. Like everyone else, I have my own beliefs around this but let’s explore what monogamy and polyamory look like.

When I think of monogamy, I think a life long commitment..  Of two people sharing a life together, learning from each others lived experiences, celebrating and motivating each other.. building a family or a home.. growing old together.. And most importantly, being faithful to one another.

When I think of polyamory, I think of a buffet line at an all you can eat restaurant. Ok that’s not fair. Up until recently, I thought of polyamory as another way for gay men (it also exists in the straight world) who are too afraid of genuine commitment to get away with being promiscuous. But it’s so much more. It’s about creating life long relationships with more than just one person. Of course it’s also about sexual freedom. People that practice polyamory accept that they can’t satisfy all of their partner’s sexual desires and so they allow each other the freedom to explore each others sexual aspirations. It’s a concept that I’m not an expert on so I’m sure if goes a lot deeper than this.

Some queers argue that monogamy is just another way conforming to pre-established  heteronormative lifestyles . And that to practice polyamory is to embrace our diverse needs and desires without shame. Either way, gays are just as capable as having long-lasting relationships as our straight counterparts.. Be it  monogamous or polyarmorous. But the question remains.. Is one better than the other?

2 thoughts on “Monogamy or Polyamory?”