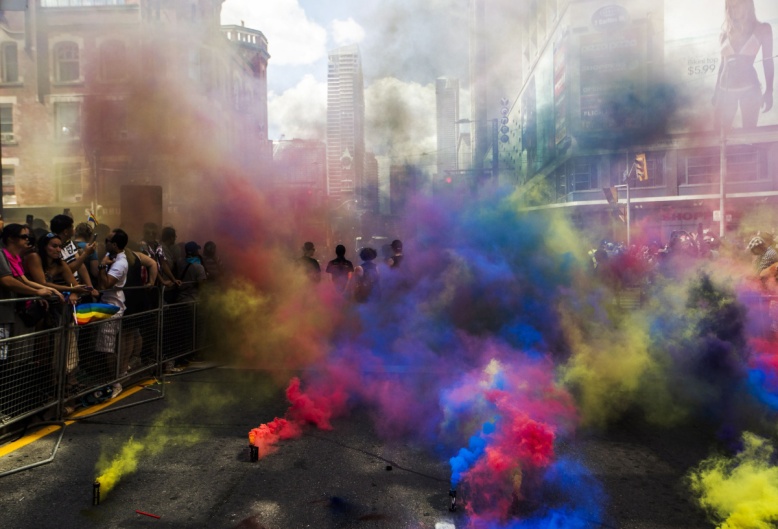 Members of the Black Lives Matter movement stand amidst coloured clouds from smoke grenades at the annual Pride Parade, in Toronto on Sunday, July 3, 2016. THE CANADIAN PRESS/Mark Blinch

From Orlando to now I’ve gone through feelings of sadness and appreciation, a joyful abundance of Pride in who we are and how far we’ve come to now absolute fucking despair. The aftermath of last Sunday’s Black Lives Matter-Toronto protest at the Pride march shattered any false sense of community formed since Orlando. It’s sickening to read the multitudes of ridiculous anti-black comments and articles on social media from people who either have no right speaking on the topic i.e. straight people who felt inconvenienced  by the 25 min delay and literally booed BLMTO marchers and the white privileged queens who can’t seem to understand or appreciate that non-white LBGT’s simply do not feel welcomed or valued in this community. If you’re already offended then this is especially for you..

Having experienced various types of racism from the LGBT community since moving here I was naturally skeptic when Pride Toronto announced BLMTO as the somehow prestigious ‘honoured group’. It smelt like a poor attempt at tokenization to appear diverse and up to the times due to all the media the movement garnered literally everywhere from the Oscars to the streets of Ferguson. Pride Toronto in my opinion has never done anything to genuinely include or support people of colour yet are quick to exploit black culture. Just because you hired RuPaul to show up doesn’t make you inclusive. The inclusion of black lives shouldn’t require an invitation or press release-especially after 35 years of celebrating Pride. Thanks to the corporate monopolization by banks and other institutions people have forgotten the political nature of Pride. That it was born through riots and protests like Stonewall and the Bathhouse raids, out of a need for change. It ain’t a party put on simply for your amusement so get over yourselves.

I’m not a super political person and tend to lean on the more conservative side of things but I can’t remain silent on this issue. Instead of progressing and learning from past transgressions we’re just doing what’s been traditionally done to black assertiveness: it gets shut down immediately and labeled hostile and anti-white in the most threatening way. Language is important so how am I supposed to feel as a black queer when the rest of the community’s saying shit like we shouldn’t have been included to begin with or that the parade was hijacked and held hostage? Or those negating the fact the black lives have in fact been disproportionately positioned throughout history by saying ‘all lives matter’. Nobody said your life doesn’t matter, we’re just saying that ours matters just as much as yours. This type of ignorance and white supremacist mentality is a huge part of the issue.   It doesn’t make sense to me that a traditionally oppressed community would turn around and attempt to oppress another marginalized group of people who are fighting for the same things that this community once fought for and still fights for today.

This goes much deeper but I just wanted to ask fellow LGBT’s to have an open mind because we still do belong to the same community despite race, social status and other superficial pillars this community seems to hold dear. Don’t tell me that these concerns aren’t warranted, simply look at your newsfeed and media coverage over the last week that’s attempted to distort the purpose of what BLMTO’s working to achieve. And I haven’t even touched on the continued killing of black men in the US by police, especially this past week. This shit is real and the sooner we come together and stop creating division amongst ourselves the sooner we’ll be able to effect actual change.

Thank you BLMTO for giving us a voice and doing what needs to be done to start these vital conversations and incite change in our community. Keep fighting for us! I’m here for it and stand in full solidarity!

“Our action was in the tradition of resistance that is Pride. We didn’t halt progress; we made progress.”-  JANAYA KHAN BLMTO co-founder

One thought on “Black Pride Matters”