One word. Fantastic. Make that two words- f***ing fantastic! If you’re still wondering, I’m referring to the one and only Cher. Her Dressed To Kill Tour stopped in Toronto last night at the Air Canada Centre.

The show opened with an energy packed set from 80’s rocker Pat Benatar- a total surprise to me since I had no clue who the opening act was. Benatar, who’s celebrating her 35 year musical anniversary, belted hits like We Belong, Love is a Battlefield and Hit Me with Your Best Shot – head banging inclusive! Her guitarist hubby single handedly closed the show teasing the crowd with riffs from Rick Springfield’s Jessie’s Girl and Seven Nation Army from the White Stripes. Awesome!

After a quick and much needed break, it was time for the main act. Having never seen Cher or any of her live performances (shameful!), I wasn’t sure what to expect. But as soon as the curtains went up I knew I was in for one hell of a show. She opened with my last summer’s Ptown jam- Woman’s World- perched atop a 20 foot pillar dressed in a majestic Egyptian themed costume with a huge feathered head piece. Pure euphoria!

She engaged the crowd with playful banter poking fun at her final farewell farewell tour promising never to return- wink wink! Her voice was on point and never cracked once. She did a beautiful rendition of the 1965 hit- I Got You Babe- that featured classic footage from the Sonny and Cher show with the dearly departed Sonny singing along. Of course the night wouldn’t be complete without several costume changes- 9 to be exact (wigs inclusive)- ranging from Burlesque, Gypsy and Native Indian to an off white body suit that exposed her heart shaped pasty covered boobs to her iconic outfit from the If I Can Turn Back Time video. I mean, how many 67 year olds do you know that can rock that and look as fierce as she did?

She ended the show on a floating platform that went around the packed venue dressed as The Madonna. A true class act, she took a bow and collected a bouquet of flowers from a fan in the front row and exited the stage. If you see one concert this year, this is it. 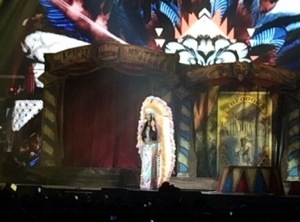